4) It Seemed Everything Was Over: That Summer Was the Best of My Life

Home » 4) It Seemed Everything Was Over: That Summer Was the Best of My Life

I was 19, at the height of my powers and thought I had left that ugly period of my life behind me.

That summer was incredible, I returned to life. I began my new life by dedicating my energies to canoeing, spending whole days at it. I was at Castelvelino, in the Cilento region, and the sea and the coasts were gorgeous; they offered landscapes that were still unspoiled: empty bays, cliffs above the sea, crystalline sea beds…

Besides, canoeing was the perfect activity for the work I intended to do for my back! Everything was perfect, and an idea was taking shape in my mind: I wanted to take on a small athletic challenge, an endeavor that would ratify my return to normal life.

In practical terms, I was planning to return to Naples (the city where I had always lived) by canoe. From the Cilento area to Naples by canoe, this was my new adventure.

By now I had trained for a couple of months and had developed strength and resistance. Here is a picture (1) to help you understand how my body measured up, from a physical point of view.

My “challenge” is easy to describe: to return to Naples by canoe from the village of Pioppi. To achieve it, I thought about it with a new body, ready for combat. 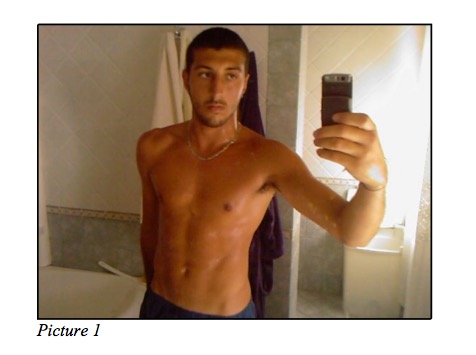 Preparations were under way: there were 200 kilometers of coast with a canoe and a sleeping bag. To tell the truth the canoe couldn’t even be defined as such. It wasn’t a real canoe for travelling in, the kind on which you mount an anti-sinking airbag, it was just a kind of beach canoe.

Finally the day of departure arrived, everyone was there to see me off and to tell me to “break a leg.” The day couldn’t have been better, and the sea was calm, ruffled only by a light breeze. My adventure could not have started better.

A last kiss, and I was off! The waves broke, beating against the hull, and my face was in the shade of a big straw hat. Slowly the beach disappeared in the distance and, with it, my friends.

Every stroke of the paddle was a caress to the sea that gave me strenght to carry out my trip and my dream.

The trip lasted 6 days, and the first 3 went by smoothly…in the morning I woke up before sunrise, and set off into the sea, and in the afternoon I stopped early, enjoying the place that I had claimed for my own.

I ate more and more fruit and drank a lot of water.

All went smoothly until the fourth day, when, arrived at Positano, my left shoulder froze up. Only a few years later I understood why it was the left one that had given in.

In any case I couldn’t stop halfway, I had to move forward.

To summarize, I had a frozen left shoulder, that is, 50 percent of my propulsion was down, and I still had a good way to go. I was in a difficult situation and didn’t want to admit it to myself.

I was in too much pain to continue, but too proud to call my father to come and pick me up. What would you have done?

I tried to reassure myself with an inner dialogue: “Okay, Moreno, calm down, don’t start panicking, think and relax.”

That night, while I was in the sleeping bag, covered with an old fishing boat, I found myself looking at a particularly magnificent sky.

The human body reacts in a very unique manner to challenges: it makes you concentrate for a few moments on something that has nothing to do with the one you need to concentrate on.

It was as if I was dazzled and hypnotized by the darkness illuminated by the stars. The morning after, I woke up and the shoulder still hurted, another day awaited me when I wouldn’t be able to maintain my pace (I had little money), and an idea came to me! I thought to myself: now I’m going to tie my left hand to the paddle so that it just accompanies the movement of the right arm.

I took a rag and used it 5 or 6 times to wrap my hand around the paddle, so it wouldn’t slip off even if I lost my grip. I started out again.

Sure, it was strange that just the left shoulder was frozen. After all, the movements were slow and perfectly symmetrical; it all made little sense. In any case, I was going forward. I was in terrible pain, but I carried on.

With furious paddling I reached Punta Campanella. I enjoyed the view of Capri. I spent the last night at Vico Equense before arriving in Naples, with Vesuvius keeping a constant watch to my right. 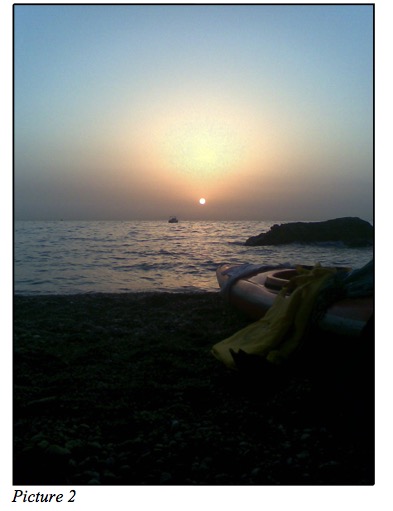 Once in Naples there was a really nice moment: I approached from one side of the mouth of the port, waiting to be able to pass. A large hydrofoil, with great courtesy, stopped especially to let me pass with my little canoe. How touching!

There I was! I had finally reached my goal, and I burst into tears. I didn’t care about the constant pain in my left shoulder. I had met a small challenge.

That summer was the last in which I could dedicate myself to my passion for sports. Symptoms that were more and more debilitating took over my life.

At that point I might have thought: “But if you were that much better, after a panic attack, the illness must really have had a psychological cause.” And yet no, there was a link to my posture. Slowly, slowly, all the knots were unraveling.

I was almost 20 and the symptoms returned with all their intensity, at first with a feeling of depersonalization and then once again with generalized anxiety. Finally, with panic attacks again.

More and more frequently, they began to be accompanied by symptoms related to digestion, initially only a little dyspepsia, which turned into severe and debilitating problems in the following years. Due to “compressions” I began vomiting everything I ate.

Those years of horrible suffering led me to behave in a very strange manner towards my friends and my girlfriend. I had become solitary and focused on myself as well, also because the situation demanded it.

I also had to leave my studies at the university, as leading a normal life became more and more complicated.

I turned from being a good-looking, bright and outgoing young man to being in danger of losing everything: college, friends, girlfriend and the good opinion of my family. It couldn’t get any worse. 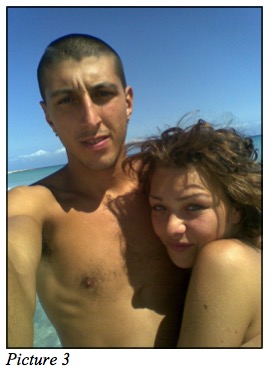 The picture 3 above shows me in excellent shape, before my sufferings began.

Apart from these symptomatic ailments I continued noticing a worsening of the curvature in my back, which physiologically was becoming “monstrous”. The curvature of the spine seemed more and more compacted, and with it there was hyperlordosis, hyperkyphosis, and scoliosis.

All that accompanied by a disabling symptomatic. The concept that there might be a strong connection between posture and these symptoms became every day more convincing. Yet no physician had mentioned this; for now, it was only a suspicion.

By now I was a lost cause who slept 20 hours a day and ate only 20 grams of food at one time, as any more was impossible for me. If I ate more than 20 grams a day, I threw it up.

The following are pictures of me before the beginning of the journey that led me back to life:

Pictures show quite a transformation, isn’t it? I won’t deny that I’m a little embarrassed to let you see them, but it’s all for a good cause. 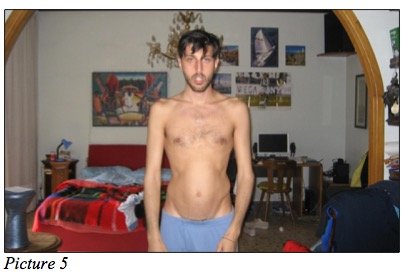 At this point I began to realize that sports had not helped me at all, up to now. They had actually made me worse, as the pain compared to before had increased dramatically.

Yet when I went to see the posturologist, for the umpteenth time, the solution he proposed was to take part in sports. For someone who had always been athletic, it was pretty disarming to realize that he had been digging his own grave.

So much anger, and so many tears. I would like to share with you the feelings I had, and still have, for a young man in the best years of his life.

I even came to think about dying. In those moments when I had a panic attack, I was so sick of having to go through it all that I yearned for death. Hard to admit, but it is the unvarnished truth.

Yet the future, after sporting with me for a long time, offered me a solution to these ills.

A fundamental element of my life which helped me a lot was Buddhism and practices such as meditation.

In this condition I could barely find the energy to breathe, but the flame of life burned stronger than anything else and with the little energy I had in my body, I meditated and practiced for whole hours at a time, day and night.

I went into a dark corner and prayed and wept, in turn.

Often I went alone to the edge of the sea to seek help from the Lord, yes, me, who had never believed in anything. I told myself over and over that all this was ridiculous. But in total desperation pride steps aside and perhaps you begin to believe in magic, or in something greater than yourself.

Surfing the Net I asked myself when the miracle would come.

The fact is that in a few months something like a miracle did take place.

But before I come to speak of this I would like to tell you about some things that I remember and that I experienced in my childhood. This might help you to create an even more accurate mental map of the connection between these events and what happened afterwards.