The purpose of this article is to determine whether Starecta is a fake product or if those who speak ill of it have misunderstood its great potential.

As with all things that work and represent a breakthrough in a given sector, Starecta also has its detractors. We know that it takes time for a new invention to be accepted, so we comprehend our detractors’ scepticism even if we are certain that they are making a serious mistake and are spreading public confusion.

Many people will read their contents and will be misled by inconclusive claims based on false notions and a rudimentary knowledge of Starecta’s theory and the Plug and Play Rectifier.

Unfortunately, those who are persuaded by this nonsense will never enjoy the benefits of the Starecta Rectifier and will remain lifelong users of painkillers and postural corsets.

This article is in response to all the false accusations that are made regarding Starecta, plus all the nonsense put out there that you can read.

In response to those who say that Starecta is a scam, you should be aware that we always provide the possibility of a refund, even after trying our product. We have always provided a refund whenever anyone was dissatisfied.

Nevertheless, statistically out of 10 Rectifiers sold, one user asks for such reimbursement, and in most cases, it is because they were frightened by the nonsense that they read on the forums by envious and incapable competitors.

So, it is simply unclear how the claims of fraud are substantiated.

Starecta is now a consolidated reality that has operated for many years. In these years we have collected more than 100 positive testimonials that you can find on our YouTube channel, on the Facebook group and on the website.

Before buying our product many people rightly wonder whether Starecta is a scam, a fake or a valid method and they google if someone has had negative experiences.

As you may have noticed, if you search on google and on YouTube you will find only testimonials from people who have had positive benefits, sometimes really noticeable to their posture and health.

The only negative reviews are made by those who have never tried the Rectifier.

This is really curious. 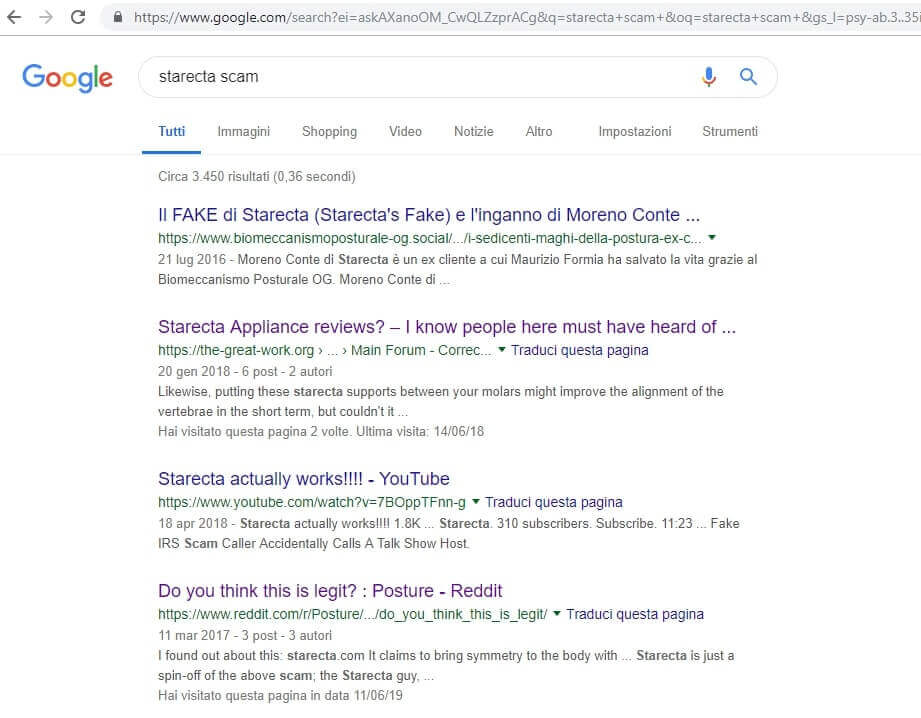 The first result that appears when you Google “starecta scam” is an article called “The FAKE of Starecta” authored by a person called Maurizio Formia. This is someone who was investigated by the Italian judicial authorities for fraud. It is ironic but the one who accuses us of fraud has been convicted of the same. You can find an article on this story in the most important Italian newspaper: The false doctor is a musician.

In this article, on the other hand, we told the whole truth about this shady character, who takes his time to tarnish our work: Who defames Starecta 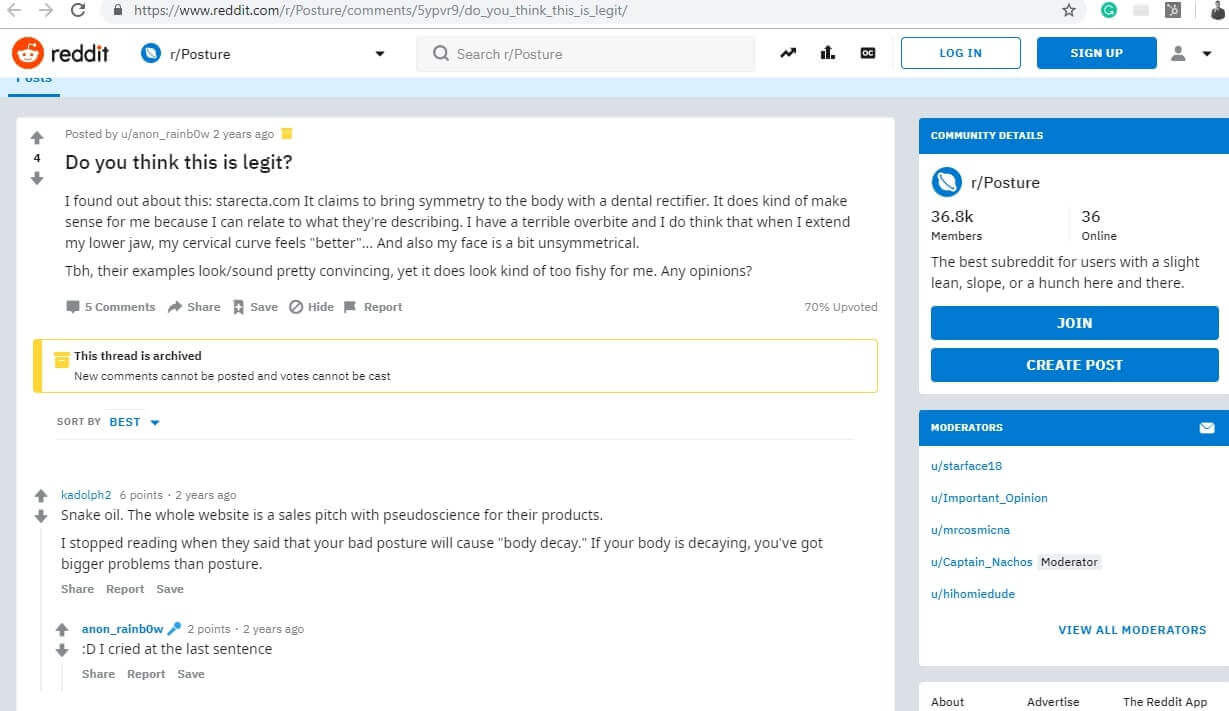 These persons claim to have found the Starecta site. Many have understood that the Rectifier brings symmetry to the entire body and states that our theory makes a lot of sense. It is good to see that there are intelligent people.

But I may have jumped the gun on declaring victory.

The “genius” inevitably arrives. Mr Kadolph2 claims he stopped reading when he read “that the body collapses”.

Obviously, kadolph2 ignores the fact that when the skull is not supported by the teeth it tends to sink, pushing the spine down and making it curve. In this way hyperlordosis, hyperkyphosis or scoliosis is generated. In addition to the spine, all the underlying districts are compressed. Thus, it generates a collapsing body effect and compression that generates countless negative symptoms. 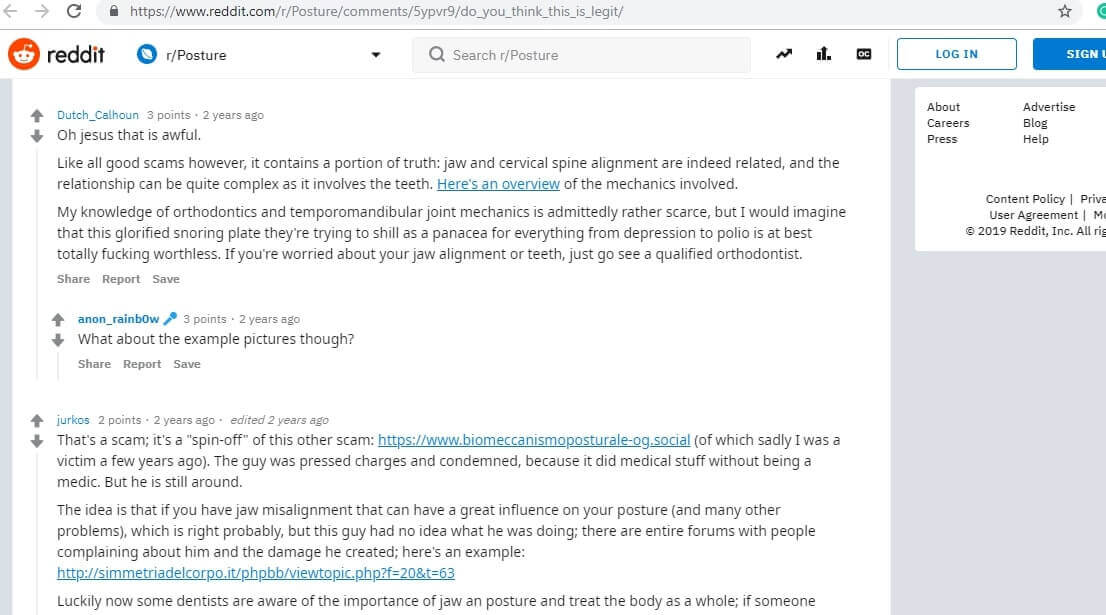 Mr Dutch_Calhoun states that like any self-respecting scam there is a portion of the truth. Thank you, Mr Calhoun, for your generosity, we don’t deserve so much recognition from such a “witty” man like you. Please ignore us next time.

Then, fortunately, he states that he does not have a thorough knowledge of the subject, but like all scams, Starecta also claims to be a panacea for all ills. In reality, we affirm that postural collapse can be the cause of many pathologies since all the organs are involved in the phases of spinal compression.

In fact, when the spinal column bends it does so at the expense of the organs, tendons, muscles that are hit and compressed. So, they start working badly and generate negative symptoms and real pathologies. We have never said that it is the panacea for all ills, but that postural collapse can be the cause of various conditions.

Then Mr Jurkos decides to make his useless contribution to the discussion by stating that Starecta is a spin-off of another scam. According to him, Starecta is the spin-off of the author who wrote the article “The FAKE of Starecta” or the same person that speaks badly about Starecta!!!!!!

According to Mr Jurkos, given that Mr Maurizio Formia has behaved in a reckless manner in defrauding people, we are also scammers following the principle of transitive ownership. By the transitive property

But we have never cheated anyone, indeed no customer has ever complained. When someone requested a refund because they were frightened by the rumours spread by gentlemen like Jurkos, we always reimbursed them. We have collected many positive testimonies from satisfied and happy people … are all these paid reviews as per Mr Jurkos’ insinuations????!!!

So how does this scam manifest itself? Why Starecta is fake and not legit?

Then Mr Jurkos (who makes his statements anonymously) removes his mask showing his true colours.

On the next screen, he wastes no time in pushing what he calls the “PROFESSIONAL” dentists of northern Italy whom he knows well.

And he is ready to give all the necessary contact information if anyone is interested. Such exquisite kindness!!

We also know these “PROFESSIONAL” dentists from Northern Italy, we know where they meet and we also know about the complaints they have received from their patients for the damage they caused to posture and TMJ.

Perhaps Mr Jurkos is one of these dentists who is now low on customers and is looking for some new fish to fry? We will never know because Mr Jurkos appears anonymously levelling serious statements against Starecta but without putting his name to them.

Such bravery is shown by Mr Jurkos, or should we say, Dr Jurkos? 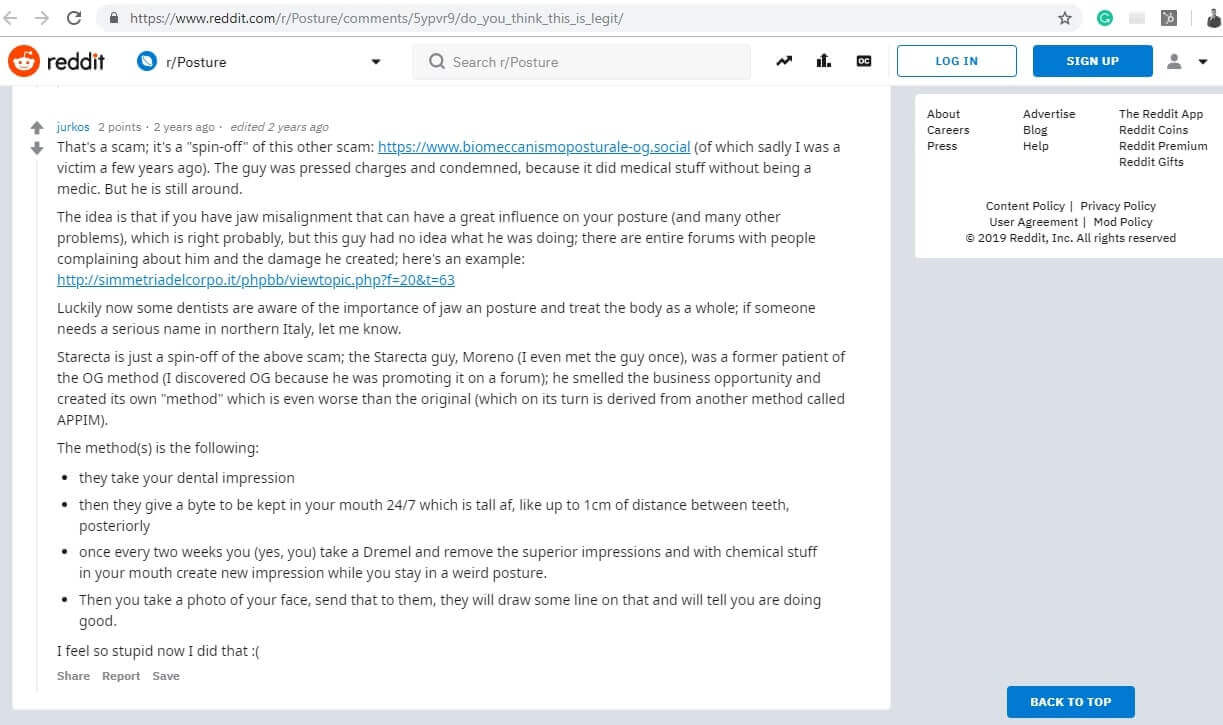 We continue along this hall of horrors.

This gentleman states that Starecta is a scam and links to the previously mentioned article “The Starecta FAKE”, written by the gentleman described in “Who defames Starecta”.

This gentleman, Maurizio Formia, claims that Starecta is a scam, forgetting that he was once arrested by the Italian police for fraud. We’ve said it before.

In the article “Who defames starecta” we explained the entire story, how Starecta was founded and why this person is so interested in throwing mud. I don’t think it’s necessary to waste any more lines on this matter.

Lastly, there is this person who claims he knows Starecta well. According to him, the Starecta method offers only a temporary benefit. Obviously, he didn’t understand anything, but like all the “experts” he claims to have understood it all.

Let’s try to explain it in simpler words:

Starecta is the only method in the world capable of permanently correcting posture. Obviously, the younger you are, the more effective it is, but on adult people, Starecta is just as effective. In fact, it interrupts the process of decay of the skull, interrupts the compression of the organs, interrupts pain and brings the body back into symmetry, within the limits of your age. It is based on a simple but original theory, which introduces a bite to bring the skull back into symmetry, and with it the body. The muscles return to symmetry, the body begins to work in symmetry.

Is it so complicated to understand? Evidently yes!

This sceptical gentleman instead of writing nonsense on the forums should try the Rectifier. If he were not satisfied he would be refunded.

This demonstrates that Starecta is unique and legitimate. No trace of Starecta’s theory existed before its foundation.

Therefore, it is impossible for Starecta to be copied from elsewhere. Those who affirm that have not understood much of its original theory. But I don’t blame them, it’s a revolutionary theory and it takes time for it to be fully understood.

Starecta materials are often plundered precisely by those who speak ill of them. These “professionals” take the images created by Starecta and use them to promote old practices based on wrong principles.