Why teeth are so important for the posture? The skull is the heaviest part of our body and it is supported at the top, on the first cervical vertebra (atlas). To ensure that our head, which weighs on average 4 kg, remains at the top with the least expenditure of energy, Mother Nature has devised a very ingenious “bio-mechanical system of levers”.

The question that we must ask is: “What or who is holding the skull on the first cervical vertebra?”

We will try to give you a picture of the situation. 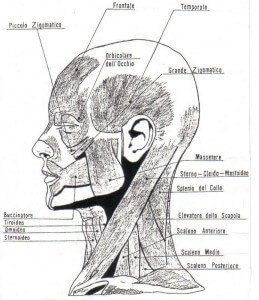 Until a few decades ago people believed that the skull was simply supported by the neck muscles operated by our willingness to stand upright. Over time and with the birth of gnathology science, clinical trials have shown a functional-anatomic and physiopathological link between skull-mandible (CMD) and skull-cervical dysfunctions, aggregating various areas of the body in a single tonic-postural system: the skull-cervical-mandible joint.

In short, scientific literature, or rather some pioneers in this new sector, has started to understand the role of the mandible in the human postural system, and that consequently neck and back problems are caused by skull-cervical-mandible disorders.

Having established that, we can realize that in this bio-mechanism that keeps sustained our head on top of the first cervical vertebra, the “jaw” has a vital role in supporting the skull.

It is a matter of fact that these medical-science pioneers have managed to understand, more or less, the bio-mechanism and how to act on it with the use of a bite in order to alleviate people health problems, but they have always proceeded by trial and error without ever being able to develop a proper relationship between correct body posture, jaw and teeth.

Despite this important scientific progress, no one has yet managed to truly solve the classic postural problems (scoliosis, lordosis, kyphosis). In fact, these scientists have been trying to test many different roads for years, in order to solve these problems. They have tried the most diverse methods, yet none of these have really focused on the issue. That is why this matter is still more of academic than practical interest. Even some gnathologists assert that there is no proof of any relationship between occlusion and posture due to a lack of convincing scientific evidence.

You can solve a postural problem only if you know “precisely” how the bio-mechanism works and therefore the exact relationship between teeth, occlusion and posture.

The second question to ask is: “How does this postural bio-mechanism work?”

The first thing we do know is that the skull always leans on the first cervical vertebra and that it is supported only by the neck muscles.

The second thing we can notice is that the jaw is suspended between the hyoid bone and the skull and it is equipped with a movable articulation: the TMJ (temporo-mandibular joint), a joint which provides a movement along three planes of space. Considering these peculiarity of the jaw, it is difficult to think that the skull can find support on teeth and lower jaw. And it is even more difficult to understand how a dysfunction in this district can produce such remarkable changes in the whole body. 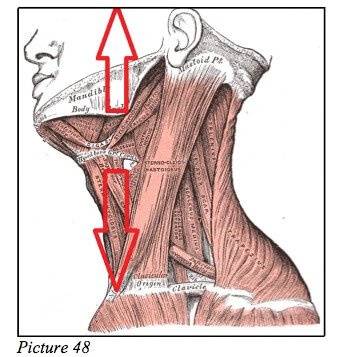 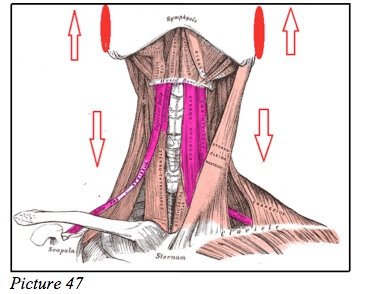 The answer is in the fact that the lower jaw becomes a stable structure and has a carrier function only at the time of occlusion or during the occlusal contact. More precisely the highest stability is produced during the swallowing phase.

The support given by the jaw to the skull, through the occlusal contact, becomes even more stable during a stronger closure of the jaw thanks to the various muscles involved.

In fact, during the swallowing act all the muscles of the stomatognatic system start working and it is exactly at this time that the jaw becomes a solid structure, just like a sailing boat mast supported by cables.

During this process both the raising and lowering muscles of the jaw contract at the same time. When these muscles work together, from opposite points, they become like tie-beam giving a stabilizing effect to the jaw.

It is exactly during the swallowing act that the forces generated by the contact between the teeth are transmitted to the underlying structures.

Let’s try to progress in steps in order to fully understand this bio-mechanism.

Next questions might be: how this whole system can compromise body posture? How is a correct posture determined? How do back diseases generate? How can you fix scoliosis, and stop the deterioration of lordosis and kyphosis?

The answer to all these questions lies in the “teeth”. We have seen how the skull is supported by the cervical vertebra and we have understood the role of the jaw. We also know that teeth are located between skull and mandible. Sometimes teeth may not be completely extruded in the premolar and molar area for various reasons. In this case there may be several factors that can cause a dental arch inclination. In most cases these problems are related to birth defects, and mainly attributable to jaw bone dysmorphoses (lower bone thickness) or lack of teeth extrusion on thin and porous bones.

Other causes not related to birth defects may be a teeth collapse or bad dental work. Nonetheless, it must be said that stress can be a trigger for the lowering of the tooth thickness. A body under high tension leads all muscles to work harder. Among them there are also those muscles in the mouth that constantly biting, especially on molars and premolars, can cause their collapsing.

Now, let’s get to the heart of the matter.

Let’s see in profile what happens to the posture of a skeleton looking at it from the sagittal plane. Let’s see if these premolar and molar teeth are not completely extruded or have collapsed over the years.

Next step will be the consequent change in shape of the entire spine. The spinal column will be forced to stay in a smaller space while maintaining anatomically its length. For this reason, you will have an increase of the curves such as the cervical and lumbar lordosis as well as the kyphosis.

In the image on the side we can see in seconds what happens in years or even in a few months of postural decay (due to strong psycho-physical stress).

It is now clear that the collapsing or the lack of extrusion of molars and premolars over the years can make the skull incline and how this structural change passes on to the underlying structures.

In practice, as you can see in the image on the side, the skull collapses until the upper teeth do not find contact with the lower ones.

The temporal masseter muscles etc etc. will force the skull to incline pulling it down.

From here on, the skull will lose its center of gravity and the body will perform a series of bio-mechanical changes such as the shortening of its natural physiological curves such as cervical and lumbar lordosis and kyphosis.

In the lower diagram you can clearly see this process broken into four phases.

This article aims to explain the bio-mechanism in a more simplified way.

If you want to know more about this, all information can be found in my book.

Carrying on with the reading we can observe the same mechanism of decay or postural imbalance on the frontal plane. 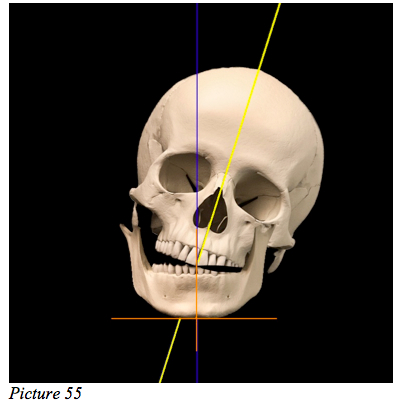 Just to sum it up, we analyzed the postural bio-mechanism on the sagittal plane observing a skeleton profile with lack of height in the premolar and molar dental area.

Now let’s see what happens to our skeleton on the frontal plane.

In the event that there is a lack of dental arch height as the left side of you may see on the picture on the side, the upper teeth will try to find occlusal contact with the bottom.

These are just examples, because, in reality, as already written before, the reasons for this asymmetry are connected to birth defects or bad dental work.

At this point, the skull will lean on the left side and the left masseter will shorten causing a stretching effect on that on the right side.

We also know that a short muscle is also much stronger, while the lengthened opposite side will be weaker.

The skull is pulled to the left side and all the muscles of the body to that side will begin to shorten.

A subsequent actions chain throughout the body will involve the development and worsening of the musculoskeletal asymmetry with abnormal curves of the spine or the origin of muscular imbalances.

The body or better the musculoskeletal structure will go through various stages until they find a new balance, or to be more precise, we could say a new “unbalanced equilibrium”.

Read the Next Article: “The Scientific Evidence that Body Posture Depends on Teeth”