Asymmetrical Face and Body: the Causes

Too often the causes of the face and body asymmetry are attributed to genetic causes. This is not entirely correct. In fact, in addition to genetic causes, there are also psychological, environmental, chemical and biomechanical reasons.

When we look in the mirror we notice the details of our body. The closer we look, the more we notice flaws and asymmetries. Indeed, one of the major aesthetic problems is asymmetry of the body and face.

Symmetry is a feature of beauty and health

Why does symmetry represent such a vital physical feature?

Symmetry is synonymous with health, strength and endurance. When we take the concept of asymmetry to the extreme, we get a better understanding of why this word is associated with health.

Imagine there is a speed race where 9 out of the 10 runners have one leg longer than the other. Which runner would you put your money on? Undoubtedly on the only runner with symmetrical legs.

The same example can be made in the world of auto racing. Imagine a 10 car race where 9 out of 10 cars had crooked wheels, which vehicle would you place a bet on? It’s obvious: on the only car with symmetrical wheels.

Being symmetrical means being beautiful and attractive. For this reason, numerous people are so obsessed with it to the point of resorting to cosmetic surgery.

How to read facial asymmetries to understand the triggering cause

Let’s take Bradley Cooper’s face as an example. Yes, he too is asymmetrical.

The cause of his facial asymmetry depends on the relationship between the skull and the jaw. In fact, he has a lateral deviation of the skull to the left concerning the mandible.

Pay close attention to this point: the lateral deviation of the skull relative to the mandible has shortened the left masseter and the left temporomandibular muscles. Remember that when a muscle is shorter it is also the strongest.

Conversely, the right masseter and the right temporal masseter are longer. When a muscle is longer it is also the weakest. Remember this:

Pay attention to this other point: when the left masseter and the temporal are shortened they also move the face’s soft parts from their symmetrical position.

When the craniomandibular imbalance affects, through the occlusion, the underlying structures transfer this asymmetry to the rest of the body. In this way, the left shoulder is raised because its muscles (trapezius, sternomastoid cleidum, scalene, hyoid muscles) are shortened.

The only way to resolve this craniomandibular asymmetry is through the Starecta Rectifier.

An example of an extremely symmetrical actor is Brad Pitt 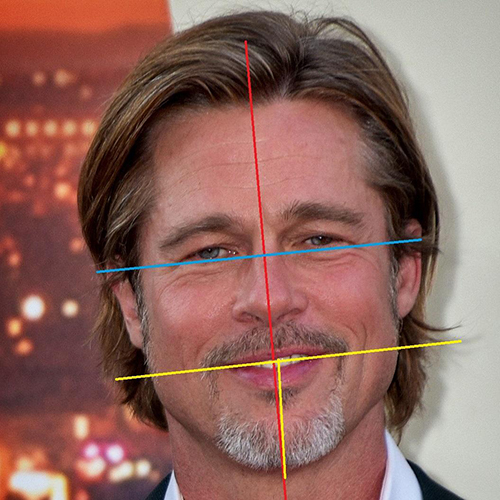 Even Brad Pitt is not entirely free from asymmetries. Careful examination shows he too has a very slight mandibular lateral deviation, but on the whole, it can be said that he is genetically and biomechanically extremely gifted.

It is no small matter that we are talking about one of the most admired actors of Hollywood.

When we analyse his face in detail we can see an incredible facial symmetry, perfectly developed on the cheekbones and jaw on both hemispheres of the face. This example of a well-developed and symmetrical facial structure has a positive effect on the body. 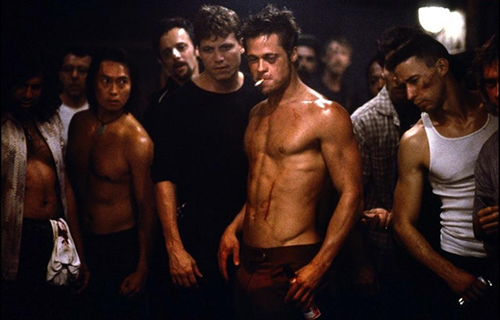 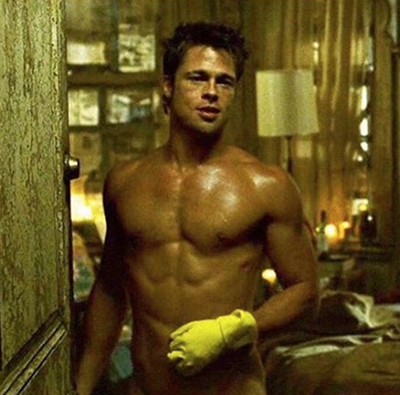 The photos of his body show a perfect posture and almost symmetrical abs since Brad Pitt has a perfect craniomandibular relationship.

I said almost symmetrical because in nature it is very rare to find examples of perfect symmetry.

How important are genetics, psychology and posture in the symmetry of man

Let’s try to understand what the fundamental factors that can modify the symmetry of man are. 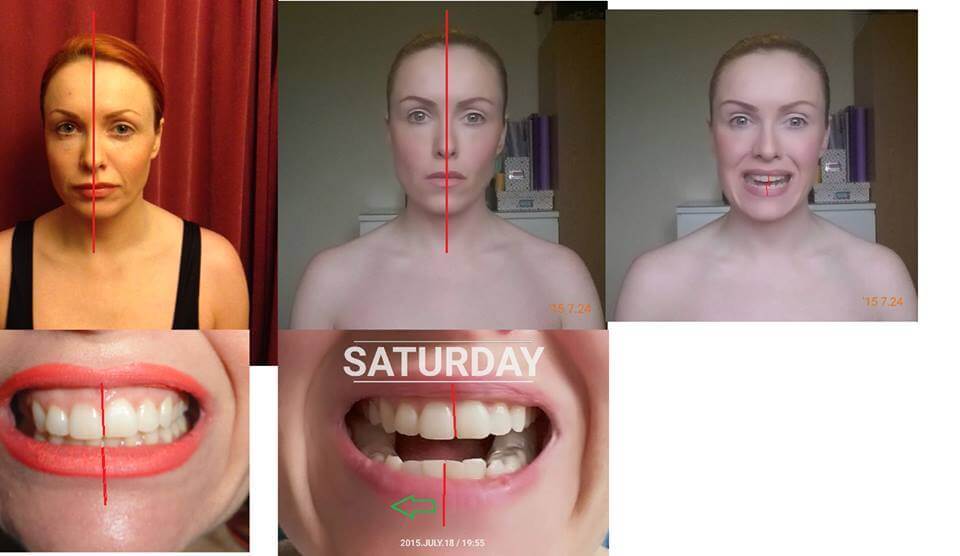 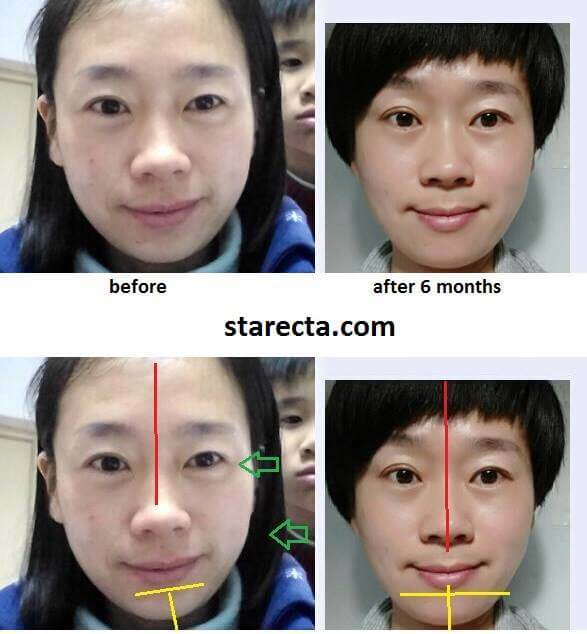 Current knowledge in the postural field has defined in two terms the possible causes of postural problems and the resulting asymmetries. These two terms are: Ascending causes and descending causes.

All the operators in the postural sector have now conformed to this approach which sees two possible causes: ascending and descending.

Descending postural problems can be caused by the eyes (defects of convergence, heterophoria, astigmatism, myopia, etc.), by the mouth (malocclusion, dental problems, missing elements, bad prostheses, etc.), by the tongue (atypical swallowing), from the ear (vertigo, labyrinthitis, labyrintholithiasis, etc …), and the psyche.

Every operator in the postural sector blunder about in the dark without ever getting to the point.

Even the operators of the sector who give primary importance to the teeth and the use of a byte, in the end, prescribe smooth bites that are totally ineffective.

Postural sector operators are practically groping in the dark

Postural sector operators are groping in the dark because by now they have conformed like a flock of sheep to erroneous knowledge that is the most popular. Nobody dares to experiment and look beyond their nose.

As they are groping in the dark, they believe that the causes of postural and asymmetric problems depend on:

Based on these factors, they consequently work with aids such as:

Conversely, Starecta has identified the cause of primary importance where intervention is fundamental. We are referencing the cranial mandibular spinal relationship. That is the relationship between the jaw and the skull.

Between the skull and the jaw, there are the teeth that regulate this relationship, so it is necessary to place an instrument that correctly regulates the symmetry and angle of the head on the jaw.

The tools that are normally used for this type of correction are bites built by gnathologists. In 100% of cases, these bites do not work because they lack the fundamental physical characteristics to activate the mandibular lever and push the skull upwards.

What is the main cause of postural problems and asymmetries of the face and body according to Starecta?

Since man has assumed the vertical position more than 200,000 years ago, incredible biochemical and biomechanical processes have begun to modify and optimise posture so that the weight of the skull (the heaviest part of the body) has the best anti-gravity mechanical support. This system is not yet perfected, meaning there are all these postural problems in humans.

The main cause of human postural problems is attributable to the craniomandibular spinal system. In simpler words, since the man assumed a vertical position he has suffered an inclination of the skull concerning the spine.

The whole human postural system is based on these three primary segments: the skull, the jaw and the vertebral column. For this reason, the cause of the asymmetries must be sought in this system.

Thanks to the Rectifier, Starecta can activate the mandibular lever effect to push the skull upwards and thus stretch the spine.