9) How to Measure Pressure in The Teeth During Occlusion

Home » 9) How to Measure Pressure in The Teeth During Occlusion

By means of a special instrument (T-Scan 3) we can measure precisely the points at which pressure arises in the teeth during occlusion. The very sensitive probe has been shaped to adapt itself perfectly to the dental arch.

The easily understood graphics of the software itself (2-D, 3-D, a graph that plots force vs. time) display instantly and with precision the points of contact of the teeth, recording the level of force exerted on every single tooth during occlusion. With such data it is easy to visualize and to obtain a perfect bite balance.

On the side we can see an explanatory picture

As we mentioned earlier, individuals who have a collapse that has led to an aggravation of the normal curvature of the spine have a lack of posterior dental height. As we can see in picture 29, their fulcrum is in the front, in the incisor and cuspid area. 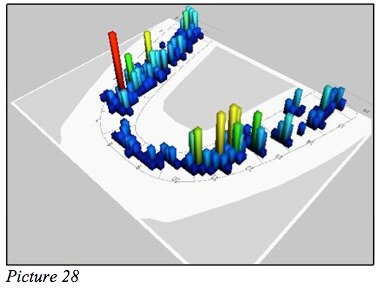 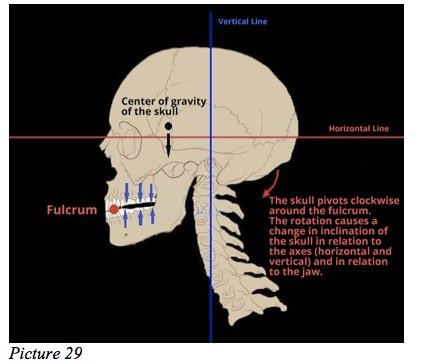 The fulcrum, in physics, is the point of support for a lever, when it lifts an object. We mean by fulcrum that point of a lever with linear displacement equal to 0, when the lever itself is forced into rotation.

Such a fulcrum corresponds with the area of greatest pressure in the teeth. This measurement can be carried out easily with the T-Scan 3.

In this case we can see in picture d1 that the fulcrum, indicated by a red dot, is positioned in the area of the incisors. It is at this point that the pressure of the teeth is the greatest (this can be measured with the T-Scan 3).

In picture 29 the skull does not find the support it needs in the premolar and molar area, thus it does not find a force that counteracts the force of the masseter muscles and the force of gravity (center of gravity of the skull). It lacks, as a consequence, the support which, by exerting an opposing and equal force, pushes the skull upward by means of the occlusion of the teeth.