I organized everything quickly, there wasn’t much time. I had spent my whole life solving important problems at the last minute, working down to the wire: exams, relationships, decisions. Once again, history repeated.

I called my father, who had always supported me and with limited resources we left.

We had only two small bags with basic needs: a fresh t-shirt, a toothbrush and pajamas. I got my tired body into the grey Fiat 600, along with a lot of hope and dreams of rebirth.

The first part of the trip was to drive to Lazio where my Uncle Fulvio lived. At that time my father was not welthier, from a financial point of view, for this reason this stop was necessary. My father asked Uncle Fulvio a loan to help me to pursue this therapy. My uncle is a generous person and accepted immediately.

Our economic worries were now solved the trip could go on.

There was a peaceful silence in the car; perhaps we were tired. While I was driving the scene of my father thanking my uncle came up to my mind. It’s very important to have a brother in the life.

Those two men, tall, and no longer in their first youth, sharing a great love of the sea, with long, curley beards, felt a great respect for one another.

I turned the sound system on, and to the sound of “Like a Stone” by Audioslave we continued our journey.

During the trip it was really nice to share my father’s thoughts. He is the type of person, dreamy and romantic, who gets his strength from his reasoning.

Finally we arrived in Pisa. What a stretch, guys! For someone like me, in my condition…

In the afternoon we met Gabriele, a young man expert in rebalancing the body and a very friendly person who explained everything to us.

Before meeting with Gabriele, in the morning we visited the Leaning Tower of Pisa.

Once in the tower, my father felt his head spin. He said to have had a mystical experience. I didn’t have the courage to tell him it was just the inclination of the tower. 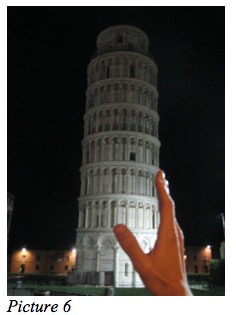 Here a night-time picture, where I am trying to straighten it up, as I was trying to do with my back.

The moment of the great encounter was the next morning, quite early. We entered in Gabriele’s small and cozy studio.

Gabriele, dedicated a couple of years to this field. He told me I would need to wear a plate that would force my body into the correct posture. We set to work right away.

While they were taking a dental impression, we had a very interesting conversation about this great discovery.

Up to now it had seemed impossible to me to be able to straighten myself out and to get better. Because the solutions offered by dozens and dozens of doctors didn’t resolve anything.

Doctors prescribed me pills, pain killers, massage therapies, psychoactive drugs, psychotherapy; they told me I should practice sports, and other doctors told me the opposite.

After all, it was not entirely their fault. The narrow relationship of cause-and-effect between my symptoms and my posture had never been uncovered, at least until now.

The impression was set and my father and I could return to Naples, in order to return after a week to pick up the plate for positioning on the teeth.

A week went by and I left again for Pisa, but this time my copilot was my granny.

What a lady, guys, getting into a car with her grandson to go 1200 km in two days! My granny was the woman who had brought me up, as I had lived with her and my aunt since I was a child. In fact, my parents didn’t get along, having divorced when I was still a child.

Arriving at Gabriele’s studio, she told me to place myself in an upright position on the chair with shoulders relaxed, arms at my sides and my belly slightly pulled in. As I forced myself to remain upright, they placed the plate between my teeth.

It was true, the plate with its new alignment forced me to stand up straight. I felt a sense of support right away that I had never before had, and it was like a flash of illumination. I was completely captivated and intrigued by it all.

Granny and I said goodbye to Gabriele and got in the car to return home. We set off down the highway with a sense of inner peace. I still had my cursed symptoms, but was certain that within a short time my new support would alleviate everything.