5) How the Skull Sinks (profile view): Kyphosis and Lordosis

Home » 5) How the Skull Sinks (profile view): Kyphosis and Lordosis

As we said previously, such deformities are caused by the collapse of the skull which, not finding enough dental support, sinks until it finds new occlusal contact.

To understand this phenomenon better, in the following lines we will explain the process of the sinking of the skull. The process is concerned not only with the decline of the skull itself but with the consequences, which cause deformities in the spine.

The individual portrayed in the picture (myself) had a decline of the skull and a resulting deformity of the spine. The process that brought it to that point can be divided into 8 phases. Let’s look at them in detail: 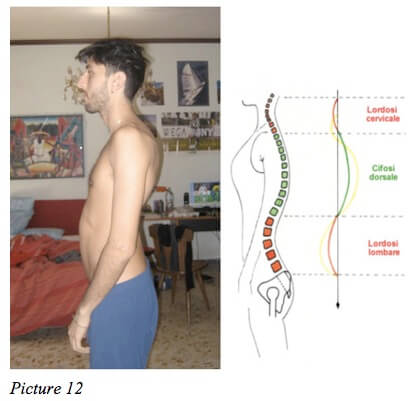 1) Lack of vertical posterior dimension on both dental arches: the individual lacks adequate dental support (in both arches in this case). The skull tends to sink down when it doesn’t find adequate support, not stopping until it finds new occlusal contact.

4) The skull, sinking down and sliding forward, pulls the spine with it, causing it to curve (increase in thoracic kyphosis)

5) At the same time, with the sliding forward of the skull, the muscles of the neck and the back can’t support such a weight, creating a loss of balance in the entire body. In fact, a body is only in balance, in respect to gravity, when it is possible to apply a force of the same strength in the opposite direction to the force of gravity.

6) The body, alarmed at the prospect of losing balance, tries to adapt to the new situation it has created. In fact, the ability to find equilibrium is carried out by means of complex reflexes that need a sophisticated integration and coordination of signals originating from diverse receptors in an area of the cerebellum. These signals are composed of: vestibular nerve afferents (these recognize the position of the head in space), tactile afferents, somatic afferents, visual afferents (these allow for the finding of reference points in space; in an upright position they work closely with the vestibule of the ear, playing an important role in stabilizing the head in its vertical position).

7) Once it has received the sensorial information, the cerebellum immediately sends out a rapid and unconscious response, consisting of joint displacements and muscular regulation to bring the center of gravity back to its support base. To do that it needs to bring the skull (the heaviest part of the body) back to the vertical line that passes through the center of gravity and stops at the interior of the base of support. To bring the skull back to the vertical, the muscles (guided by the cerebellum) have to recalibrate the muscular load and reapportion it. In this way the lumbar area accentuates its own curvature. Accentuating its curvature, the lumbar muscles contact, pulling the spine backward, which in turn shortens and pulls the skull back, causing it to return to the center of gravity.

8) In this way, the physiological curvature of the lumbar area increases due to the action of the muscles that contract (increase of lumbar lordosis).

To recapitulate, we have seen that the spine is forced to preserve its own length within a reduced space cause by a lack of dental support (Pictures 14 and 15). 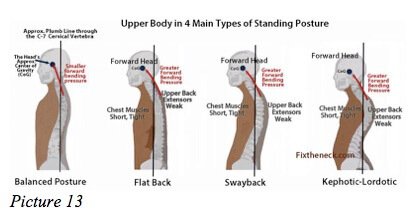 In other words, we have seen that due to a lack of dental height the skull sinks, reducing the extension of the spine. This is forced to remain within a reduced space and the result is an aggravation of its normal physiological curves. We can see this phenomenon in pictures 14 and 15.

In picture 15 the skull, due to a lack of dental height, falls from position 1h to position h2 as a consequence of the contraction of the spine.

Picture 15 shows the chains of muscles that envelop the spine. Those in blue tend to contract, while those in yellow tend to extend.

This phenomenon creates an enormous imbalance in muscular and skeletal forces with accompanying compression of the nerves, blood vessels, inner organs, etc. This is the cause of numerous pathological conditions (hypochondria, stress, anxiety, gastrointestinal problems, etc.).

There is one condition that demands that I talk about in depth. 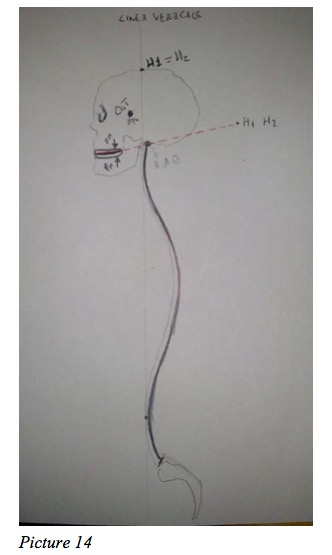 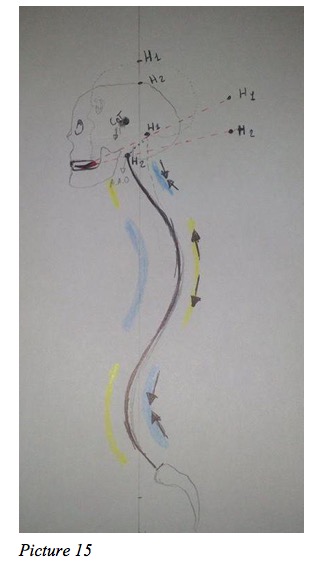