28) The Lateralization of the Jaw

Home » 28) The Lateralization of the Jaw

Lateralization, as we have said previously, is the shift of the jaw in regard to the skull to one particular side. Lateralization is different from lateral deviation because the skull and the jaw do not change their inclination, but limit themselves to shifting.

The phases of lateralization can be superimposed on those of lateral deviation. Nevertheless there are two fundamental differences: 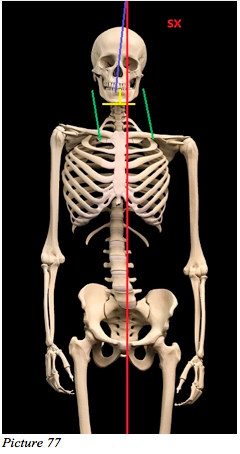 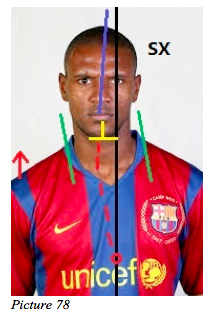 Thus the musculature on the right side gets shorter due to the laws of muscular plasticity.

Thanks to this vertical line (black) we see that the skull is displaced to the right and that his jaw has shifted to the left.

Comparing this picture (78) with the one immediately preceding it (77), we can see that they can be superimposed in terms of musculoskeletal compensation.

It is important to remember that there isn’t only lateralization, or only lateral deviation; we can have both phenomena at the same time. These phenomena produce variances that interact with one another to create displacement and have an influence on one another as well.

For example, lateral deviation and lateralization can be found on opposite sides to one another, or even on the same side. All these variances induce different types of musculoskeletal compensations and with each of them, one has different symptoms.