27) How Do We Perceive Asymmetry?

Home » 27) How Do We Perceive Asymmetry?

This line represents the longitudinal axis.

One needs to run one’s gaze over the entire body, paying great attention, starting from the head, down to the feet.

The first thing to note is the head falling heavily to the left. As well we can see that the left side of the face is more developed than the right side. These clues point to a serious lateral deviation to the left.

The left ear also calls the objective viewer’s attention to itself. It is clear how, owing to the huge burden of labor on the masseter muscles, the left ear has assumed the form of a “jug ear”. The “jug ear” form is in fact due to the fact that the muscles on that side have become shorter.

Finally, less evident but equally indicative of a left lateral deviation, is the left eye. It is less wide open than the right eye.

With the passage of time and through innumerable sports activities my body succeeded in holding out until the age of 18-19. Picture 1 represents one of the last moments of my apparently healthy physical form. In that photograph, I was seemingly in good physical shape, but it was nothing but the fruits of an extreme muscular compensation developed after years of sports. My body wasn’t in good shape at all and the reality was much different than it looked. It was as though holes in a dike had been plugged with kitchen rags. 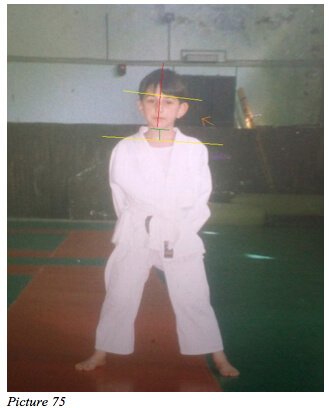 Even today most people have the idea that to help postural problems it is necessary to do sports, for which reason I worked hard through swimming to straighten myself out. These efforts brought about huge musculoskeletal compensatory measures, which then, in their turn led to strong compressions, particularly in the vertebrae corresponding to the stomach. The immediate result of that was intense muscle pain.

Picture 76 corresponds to the period of time just before straightening. Throughout the years I had compensated for my skeletal asymmetry with my musculature.

Nevertheless, for a variety of reasons, my musculature hadn’t saved me any longer. For this reason, during this time, I was literally collapsing, in the sense that my skeleton continued to fold. 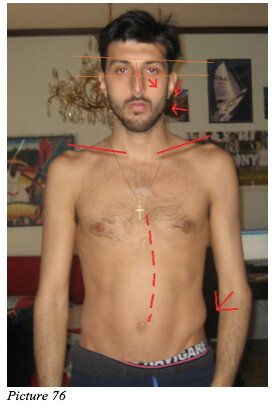 One sees very well how my gaze is lowered, towards the left. It is also evident to what extent the left side of my face is more developed than my right.

Muscles, when they get shorter, become inevitably stronger than their counterparts which, instead, becoming longer, weaken themselves.

This explains what is meant by muscles working asymmetrically.

Another example is given by my left ear, which during my childhood was a “jug ear”. Conversely, over the years, due to muscular compensation, it returned to its rightful place.

Picture 76 shows other examples of muscular compensation. The dotted red line is lightly curved to the left. This line indicates the tendency of my scoliosis to bend to the left. Also my pelvis is rotated due to the hypertrophy of the muscles. In fact, the red arrow points out the hypertrophic side.

As we have previously mentioned, during the period of growth in childhood the body had to bring the skull, leaning to the left, back to its axis. To do that it created a number of musculoskeletal compensatory measures. One type in particular merits a special mention. I am referring to the lateralization of the jaw. Let’s look at it in detail.