26) The Dangers of Muscular Compensation

Home » 26) The Dangers of Muscular Compensation

In fact, not all who appear straight and upright are symmetrical. In cases of this kind, it is thought that the muscles keep the spine straight. In practice, a true asymmetry is hidden by a false symmetry due to the intervention of the muscles.

There are numerous athletes who present an optimal vertical dimension of the teeth that permits them to remain straight.

Let’s take for example Alexander Dale, an athlete who excelled in his field, swimming. He died suddenly and inexplicably of a cardiac arrest. Let’s analyze his case specifically.

Alexander Dale had a lateral deviation to the right in Phase 4, compensated to a great extent on a muscular level. Swimming permitted him to compensate for his asymmetry by means of the musculature.

This aspect shows itself in a good skeletal symmetry but an incredible muscular asymmetry. Let’s see why, starting with an analysis of his face.

– the right eye is less wide open than the left

– the right cheek is much more developed than the left

– the mouth appears to be drawn towards the right due to the more powerful musculature on that side. 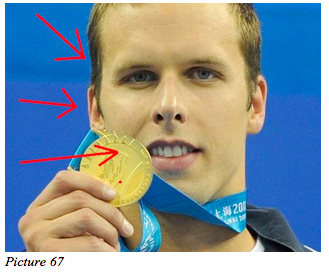 We can see these aspects also in other pictures: In picture 68 we also see how the face favors the right side due to the stronger musculature on that side. 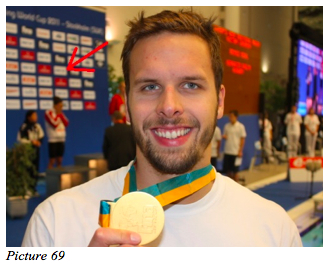 Now let’s analyze the picture 70 of the lateral deviation of the jaw to the right and its consequences for the rest of the body.

We note how the entire musculature on the right side is more developed compared to the left side, which, on the other hand, has gone into spasms.

Taking a look at the abdominal muscles we can see their evident asymmetry. It is clear how the muscles to the left are making an enormous effort to keep Alexander from falling to the right. These muscles, in spasm, succeed in keeping the spine fairly straight. 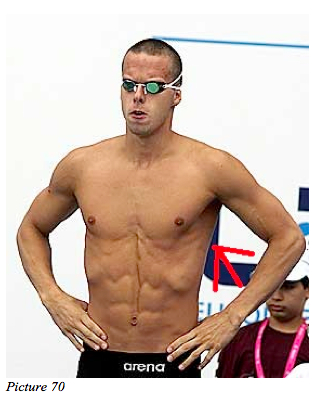 Other serious compensatory measures (not seen in the photograph) are to be found in the cervical area. In that area there are nerves and arteries that, if damaged, can cause serious problems.

In picture 71 the swimmer’s incredible asymmetry is clear. We can see how his entire right side, arm and abdomen in particular, is much larger, is more powerful than the left side. 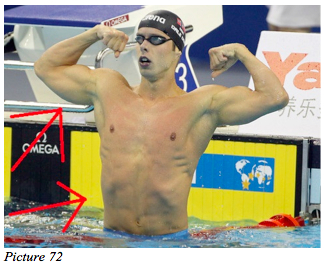 A body with an asymmetry of that kind, used to doing a sport at a competitive level, has to lead to serious problems. It’s as though a Ferrari would go 300 km per hour and suddenly have a part of its structure break down due to wear and tear in the area of greatest strain.

The causes might be traced to internal compression of the blood vessels, nerves, inner organs and others. These unphysiological compressions tend to wear away at the internal structures. Wear and tear on the inner structures involves all the inner organs from the head on down. Major damage to or a sudden tear in one of these can be fatal.

Among the athletes who have died suddenly “for no reason” are also soccer players, among them Antonio Puerta.

For now, this is only a hypothesis, as a more detailed study of these deaths that occurred suddenly and “for no reason”, particularly in competitive sports, is needed. 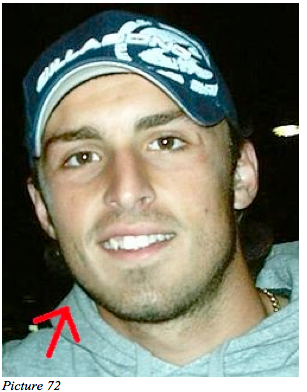 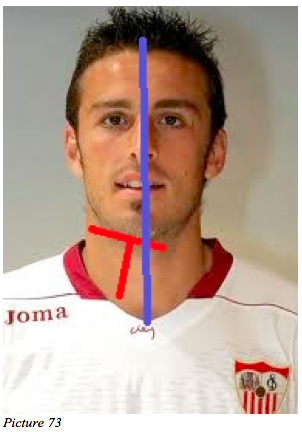 The aim of this investigation would be that of improving the performance of athletes in the field and reducing the number of accidents and sudden deaths.

How is it possible that in 2013 one takes it for granted that a 23-year-old guy dies of a heart attack? Will there be reasons that generated the heart attack? Not everything can be reduced to genetic causes. Of course, it can’t be said that the cause is poor nutrition, as we’re talking here of athletes who are “healthy as a horse”. The question of asymmetry is, in my opinion, the more interesting one to explore.

As opposed to asymmetrical athletes, who have a short life, there are people who don’t overtax their physical bodies and live long and tranquil lives even if they show typical characteristics of asymmetry. Such is the case with the Neapolitan actor, Antonio de Curtis, stage name Totò.

As can be seen in picture 74 his jaw is raised to the left. This indicates a very serious skeletal asymmetry. But Totò cannot be considered a serious case. In fact, notwithstanding his serious skeletal asymmetry, his muscular symmetry was not badly affected. This allowed him to remain in Phase 1of misalignment and to lead quite a respectable life.

We have thus learned that when it is the muscles that compensate, serious problems can arise.

If we could construct an instrument that measured compressions in the musculature we could finally succeed in detecting such compressions. Such an instrument would need to be able to detect the typical signs of compression, for instance the warmth produced by muscles that have been more developed or by the areas with less blood supply, the thickening of the walls of the organs, muscle wasting, etc.

At any rate I would not like to give the impression of undervaluing skeletal asymmetry. This, although less dangerous than muscular asymmetry, is a condition that leads to great suffering.

People with serious skeletal asymmetry are those commonly called “hunchbacks”. They are those who have not compensated for their asymmetry by means of the musculature. In this case the asymmetry is immediately apparent to the naked eye, also the eyes of those not really paying attention.

Paradoxically, they are more fortunate than the athletes mentioned before, as the so-called “hunchbacks” have never undergone intensive athletic activity, thus they have never had the occasion to compensate for their skeletal asymmetry, using their muscles. This does not take away from the fact that these people lead difficult lives. They have found a precarious musculoskeletal and psychophysical equilibrium which allows them to keep going with a great expenditure of energy. To be sure, this is not a wonderful life.