According to the definition of symmetry, “an object has symmetry when its form presents regular repetitions”. That said, one must add that there are various types of symmetry.

In our case we can say that a human being is symmetrical if the right half and the left half of the body are mirror images of one another.

We can take a look at the Vitruvian Man of Leonardo da Vinci, drawn in 1490. This is a representation of the ideal proportions of the human body, and demonstrates that they can be harmoniously inscribed within two “perfect” figures, a circle and a square.

The Vitruvian Man, having been placed in a circle and in a square, appears perfectly symmetrical. 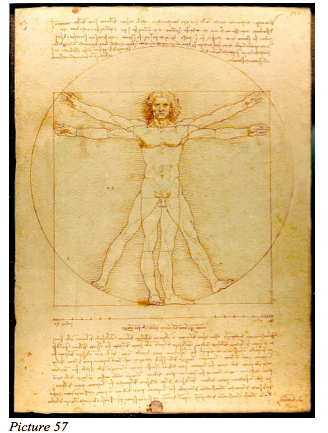 Also, in regard to the field of mechanics, we can describe the importance of symmetry using a small example. A car is designed in such a way that its right half mirrors its left half. Try to imagine a car with a crooked frame – who would ever buy it, and above all, who would be brave enough to drive it?

It’s quite normal that it be that way, as a car with an asymmetrical appearance has much more of a chance of breaking down than a symmetrical car. In fact, an asymmetrical car subjects several mechanical components to greater use compared to others. For example, weight wouldn’t be distributed equally on the tires, and those tires that support a larger amount of weight are sure to wear out before the others.

A law of this sort is perfectly applicable also to machine-man. Following this train of thought we touch on the laws of biomechanics.

A case in point is the example of the soccer player, Pato. He has been pointed out by experts in the field (posturologists, coaches, sports doctors, etc.) as running poorly! They have diagnosed that he has very elastic feet, but a slow rebound on the ground. During lift-off from the ground, the pelvis is too far forward, when, according to the laws of biomechanics, it should be in line with the pelvis itself.

He does run poorly, this is clear, but the reason does not lie in the fact that he has never learned to run properly.

Running is the most natural thing that a person can do. If Pato runs badly, this is a purely biomechanical problem, a problem that has to be analyzed from that point of view.

Pato’s wrong way of running is due to a misalignment of the pelvis which, in its turn, is caused by a lateral deviation of the jaw.

Like Pato, there are many athletes, in every athletic discipline, who suffer from a drop in performance caused by problems derived from asymmetry.

Musculoskeletal symmetry is an indispensable element if one wants to get the most out of one’s body. In fact, being symmetrical permits us to keep going with as little expenditure of energy as possible.

In picture 58 one sees a skeleton divided into two precise halves, a right half and a left half.