As we have seen previously, by means of the Rectifier support to the skull can be provided in such a way as to compensate for lack of dental height. The straightening of the skull also changes the spine, but it is by means of swallowing that the muscles withdraw that keep us in posture. Just think of two very significant facts:

1) The force emitted by the contact of the cuspids at the moment of occlusion can reach up to 400 kg.

2) Every act of swallowing redistributes 1 kg of force along the entire spine.

The force applied to the teeth during swallowing is about 30 kg, for the duration of around 685 milliseconds.

In picture 44, the skull, with the Rectifier, redistributes the load in a uniform manner along all the dental arches. 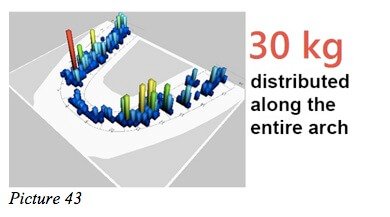 In picture 45, without dental height the pressure is exerted only in the incisor and canine area, thus the fulcrum is situated in this area.

Picture 46 shows the decline of the skull as it was in picture 45. In fact in picture 46 it is visible just how much the skull has sunk, changing the direction of the gaze. In picture 46, the skull, having sunk down, finds a new stable occlusion and there is a redistribution of the masticatory loads. 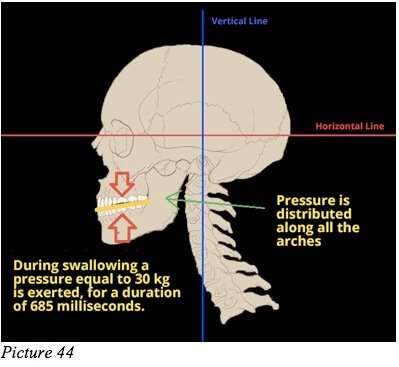 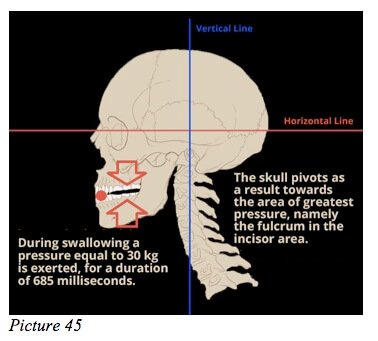 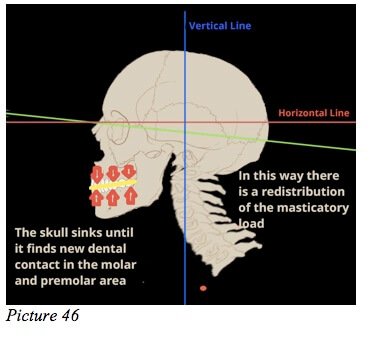