After 3 months of rebalancing I came to a decisive turning point without which I could not have been able to continue with this method.

Up to now the method had functioned really well, but there was no user’s manual, there was no doctor taking care of me. Everything turned on my personal experiences. I had to modify the plate every fortnight based on what my body told me.

However, after three months the plate was not supporting me anymore. How was this possible? Also that evening I had done everything that had been prescribed for me in Pisa.

I did it over and over again an infinite number of times, until I then arrived at a conclusion – that I needed to change something. I spent several hours in front of the mirror and didn’t get it: where was the problem?

I got it only after 4 days of continual modification: I felt I had to lift my bite! That was the solution. In practical terms, that plate, until the end of the third month, had done a wonderful job of straightening me out considerably.

I felt my head constantly falling forward, and it was difficult for me to breathe. It was at that point that I understood that if I raised the position of my bite, I would have increased the lever action that drew the head upwards.

Many people quit the therapy, as they don’t succeed in overcoming the initial difficulties that present themselves. That of having to raise the bite is one of these. In fact, those people panic and don’t understand how to deal with them, abandoning the therapy out of fear.

For that reason I wrote that you have to have a personal store of knowledge and experience to be able to cope with this journey. Meditation and listening to my body helped me a lot in this. 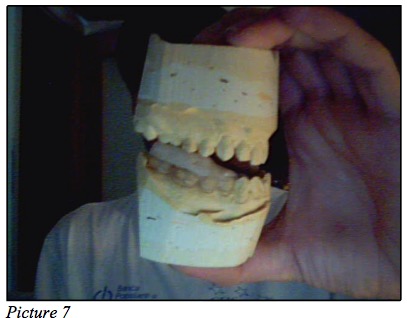 In picture 8 you see me with my raised bite. In picture 7 you can see to what extent the plate has been raised.

I sensed that the plate in my mouth, as though it were a lever, supported my head, and brought it back to an ideal position between the shoulders. 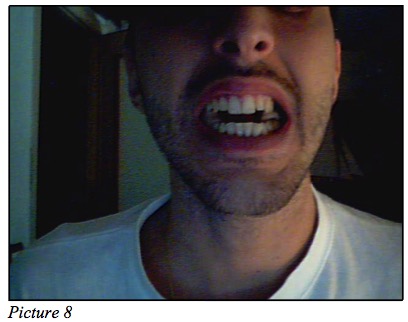 If the height of the lever doesn’t correspond to the severity of the displacement it needs to be increased.

In picture 9 you see how, raising the bite, the lever that supports the head becomes much more effective, and the head is better supported.

After I had listened deeply to my feelings I sensed that I had had an insight, but it wasn’t quite complete.

In the following months, my bite fell once again into a condition of contact wherein my incisors met one another, tip to tip. As a matter of fact, my back was straightening out, and I didn’t need that additional height any more.

I’ll explain this principle better in the following chapter. 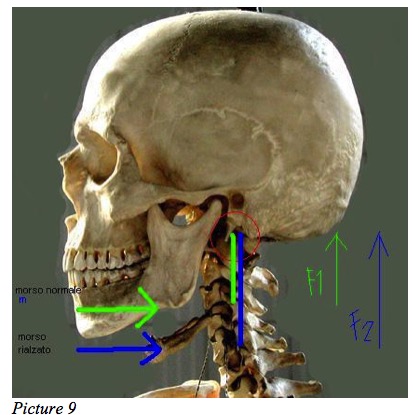